I think a good term to describe the plans for 2015 would be "no rush". While improving the site's functionality and adding new content, I was aiming to bring here some great people. I believed it would possible just by making an original and noteworthy stuff.

Overall I call the 2015 a good year. With a very small promotion, we already have 1050 registered users, and much more than that interacted with the site as guests (currently it's possible to both vote and discuss without an account). The feedback has been extremely positive, many users seeing OpiWiki's potential as I see it – the potential to be a TOP50 website worldwide. And, we're very optimistic about 2016. If the energy is there, that's exactly what I hoped for.

Along the way, I've met a lot of people, and before going into the 2016, I'd like to thank some of them.

I'll start, of course, with X-Abrupto, or simply X for us. X found the site on October 13, and since then, his work has been nothing short of spectacular. He has created 6150+ items, rankings, and rating areas, all of them high quality. That alone is a tremendous ammount of work. X is now officially in the OpiWiki team, and he is working as a moderator as well. Then there are our countless PM conversations, idea exchanges, and reports. Lastly, not leastly, his great opinions. He has a great sense of OpiWiki and he's the person I've been searching for a long time. Thank you X, your work has been an inspiration!

Big thanks also to our constant contributors: Fred BC, noah364, Aahmused, and EdGoodger. I admire Frederic's writing and discussing skills, Noah is fantastic at in-depth discussions, making me increasing any word limits, and Tom's always-well-considered answers are remarkable. Ed has not been that active as we could wish, but his contibutions are also great, and if I asked him something, he was there.

Special thanks also to YUNo, grin, and Teku for their great contributions, and for all users who're making this site special.

The year 2016 will be different. We'll start similarly, improving the site and bringing great people to us. Probably in April, we'll start a new chapter – we'll end the beta phase, and then we'll be free to focus on promotion.

Until then, we'll have a newsletter system. Of course, a must-do, and that should significantly increase the traffic.

OpiWiki will also expand its horizons beyond opinions – we'll be providing e.g. beautiful lists and items similar to answers. People often use search engines to search for e.g. list of video games of some_genre, or movies similar to some_movie. With very little additional work, we'll have thousands of additional pages to represent us (search engines, etc.).

There will be many more new features and improvements in 2016 – which I'm leaving unknown for now – stay tuned. We'll make it a great year!

Thanks for the tribute!

Throughout our numerous private messages and exchanges here on Meta, I discovered that PS is one of those guys with a vision. Most people I've met in my life had some sort of constant resignation on life. A lot of people don't believe in the possibility of making something huge in their life. Well, Paul is not one of those. His vision is very audacious, and I like it a lot. I also share his vision now. It's simple. To me, OpiWiki is going to be a gigantic platform on internet and will be in the top 50, if not the top 25 viewed websites in the entire world. When I look at websites that figure in the Alexa rankings, I see websites that OpiWiki can devour. Because OpiWiki does what they do and it can do even more.

Now, all we need is more people to join us. We need more casual, regular and dedicated users. We need people to feed the website. We need more opinions and items! We will eventually need more moderators too. So, to all those who want to take the chance and be part of what could be the adventure of a lifetime: why don't you do it? Be super active, contribute, take part in discussions, create polls and items and if you are good enough, who knows, maybe you could be part of the team!

reply
subscribe
share/challenge
flag
Add your opinion
Challenge someone to answer this topic:
Invite an OpiWiki user:
OR
Invite your friend via email:
@
click for template
x
OR
Share it: 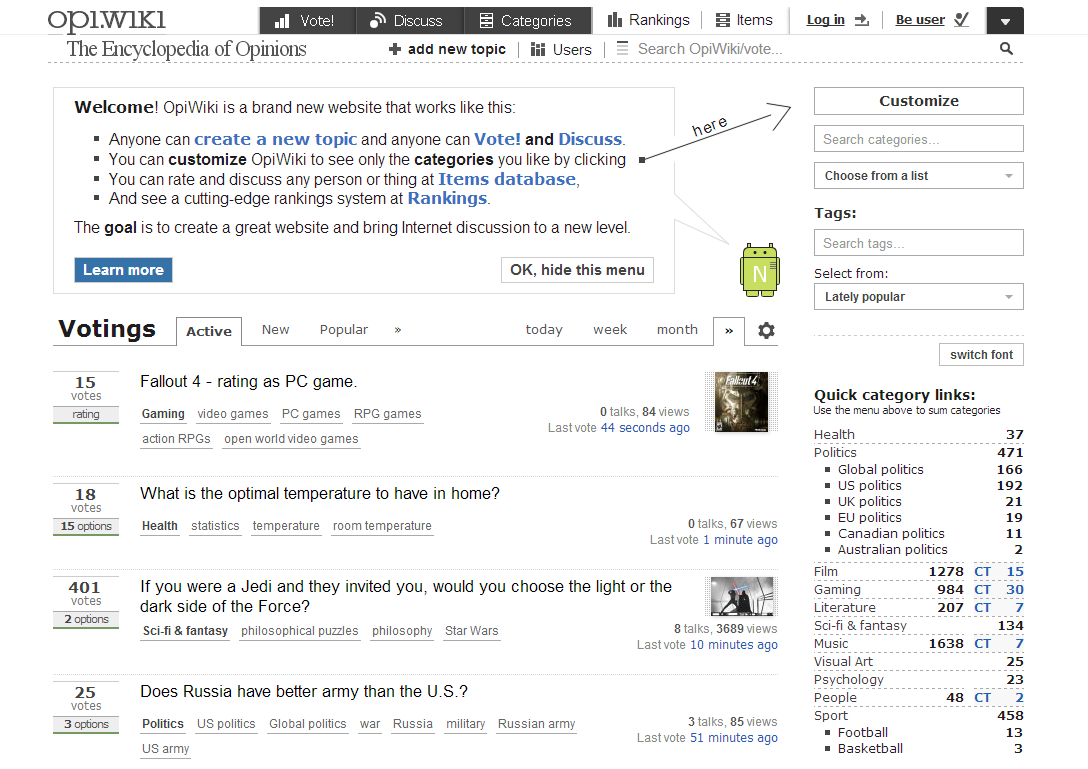